The Man From Delaware Might Not Be So Aware 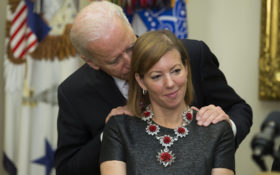 Vice President Joe Biden and wife of Secretary of Defense Ashton Carter at the secretary’s swearing-in ceremony.  She said the photo is misleading and the vice president’s behavior was not inappropriate.

Ask most admirers and those women who have been at functions where the former vice president has been in attendance and hugged them will tell you that the former vice president is by nature a touchy-feely individual meaning no harm or sexual intentions–just very friendly.  Yet, the recent allegations of a former candidate for Lieutenant Governor of Nevada, Lucy Flores, will say such behavior– touching, and smelling her hair– made her feel uncomfortable.  Other women have come forward with similar allegations while still others, such as the wife of the former Secretary of Defense, Stephanie Carter, said she took no umbrage and saw it for how Mr. Biden meant it– as a supportive and heartfelt gesture of friendship.

The media is not known for looking for nuance and balance but bold accusations in this era of sexual harassment or inappropriate touching behavior.  These accusations against the former vice president seemed oddly timed, coming on the cusp of his announcing his candidacy for president, a wish and dream long held, once unsuccessfully tried, and now being re-visited in the wake of his son Bo’s death and wish for his father.  Mr. Biden stayed out of the 2016 race for fear of derailing Hillary Clinton’s candidacy.

That wish may again be deferred or now ended because of a new nick name as a result of these touching tales–“Creepy Joe” by the current president.

Like Facebook posts of long ago (relatively speaking), Mr. Biden’s photographic trails of shoulder grabbing from behind (or front), nuzzling of women’s necks, or encircling his arms around their waists, has been a treasure trove for journalists.  As a result such accounts and photos have gotten him into the fiasco vortex of presidential politics– that of a man who doesn’t know the boundaries of personal space or where social grace stops and sexual intimacy begins.  Is it akin to the argument about rules changing where adversary says to the other, “you’re moving the goal posts” on what’s appropriate and what’s not?  Well, yes and no.

One does not consult Miss Manners for what’s appropriate or not in the culture.  One lives in the culture and observes changing norms.  One would have to be in the space shuttle for the last year not to have realized that the #MeToo movement has changed the world or at least the world of business and politics in how women should be treated and where personal space starts and social space ends.  Mr. Biden lives in this world and his avuncular personality aside, hugging and kissing women not family or close friends, is no longer appropriate, assuming it ever was.

Mr. Biden is paying that price–fairly or unfairly–just when it matters most to him–on the eve of his announcement of candidacy.  Is this fair?

In my opinion, it’s not, but what in presidential politics is these days?

What should Mr. Biden do?  His video of a few days ago was a first start.  While badly recorded and oddly choreographed, he acknowledged his behavior that had made many women uncomfortable but he didn’t apologize for it.  Acknowledgment is step #1.  He neglected the apology, which is step #2.  While he says he “gets it,”  he really defends his prior behavior although he has vowed to end it.  Kind of like the older guy that he is rueing the change of cultural norms.  It’s not a man looking to build a new future for a new America.  It’s a man bent on the ways of the past that he now misses and still defends.  This fiasco is only accentuating his shortcomings rather than allowing him to look forward.

I wish the former vice president well.  He is a good man who has served his country well, suffered personal tragedy most of his colleagues never have (some have much more such as the late Sen. John McCain) and has now reached a point of reflection in his post-vice presidency that he believes makes him fit for the Oval Office, especially now.  One wants the best for him, a place at the starting line, not being disqualified because of past behavior pre-#MeToo.

Does the man from Delaware still have more to do on this issue?  I think so.  Being aware is a first step.  Now, he needs to follow through with the apology and move on–wherever that path takes the former vice president of the United States.