Facebook Turns the Page to Stay Relevant (and Out of Trouble)

Facebook CEO Mark Zuckerberg in a post shared on Wednesday that the world’s largest social media platform would take a new direction to evolve into a model evidently borrowed or triggered by China’s WeChat communications–encrypted, private messaging services using its WhatsApp and Messenger apps. Facebook’s semi-public, not-very-private News Feed is out.

“My focus for the last couple of years has been understanding and addressing the biggest challenges facing Facebook. This means taking positions on important issues concerning the future of the internet. In this note, I’ll outline our vision and principles around building a privacy-focused messaging and social networking platform. There’s a lot to do here, and we’re committed to working openly and consulting with experts across society as we develop this.”

Zuckerberg’s post also declared that he believes “the future of communication will increasingly shift to private, encrypted services where people can be confident what they say to each other stays secure and their messages and content won’t stick around forever.” Zuckerberg said “This is the future I hope we will help bring about.”

This is a page-turning almost tectonic shift for Facebook which built its $55 billion annual advertising fortune and still-continuing though slower growth on products that aren’t really private, don’t have end-to-end encryption, and never die or almost never.

Why the change in direction?

Zuckerberg never does anything unless the user data point that way.  If Zuckerberg says he expects that WhatsApp and Messenger are the future, it’s because that’s where Facebook sees that users are already spending their time.  Obviously he’s been looking East toward China’s WeChat, owned by TenCent.

This isn’t totally unexpected, the tech-watching newsletter Recode, said in light of Facebook’s announcement last fall when it told investors that Stories, the ephemeral photo and video montages it copied from Snapchat, a platform it tried to buy, was blowing up in terms of popularity. “I just think that this is the future,” Zuckerberg said at the time. “People want to share in ways that don’t stick around permanently, and I want to be sure that we fully embrace this.”

Facebook can see what the world is doing and that is sending private messages and sharing disappearing photos and videos — and it’s leaning into those trends to borrow a phrase from its COO, Sheryl Sandberg, whose book is called the same thing, “Leaning In.”  Evidently, Facebook likes to lean.
What will happen to Facebook and Instagram? Nothing yet, says Recode reporter and Facebook observer Kurt Wagner. “Zuckerberg didn’t say anything about abandoning Facebook or Instagram, and it sounds like Instagram will eventually get more privacy and encryption features that fit with Facebook’s new mission. The reality is that Zuckerberg couldn’t abandon those products even if he wanted to: The vast majority of Facebook’s revenue comes from those two apps, so they won’t be going anywhere.”

What this does seem to signal, though, is something rather startling: This feels like the beginning of the end of Facebook’s core social network, the newsletter predicts. Facebook isn’t going away anytime soon, but importantly  Facebook’s direction is changing, albeit not dramatically apparent yet.

The most important question is how will this impact Facebook’s business model which emerged in the company’s congressional testimony over a year ago that seemed the focus of Congress’s attack and concern.

Facebook’s business model is built on a data-driven advertising model. Facebook puts ads into users’ feeds, and messaging apps don’t have those feeds. Those ads are also valuable to advertisers because Facebook can target people based on information that they keep on their profile, the target of Cambridge Analytica’s interest in Facebook’s user data. If everyone is using private messaging apps with high levels of encryption, what data will Facebook harvest to target people with ads moving forward?

That doesn’t mean there is no business model for private messaging — WhatsApp and Messenger have Stories, for example, and Facebook can sell ads alongside those Stories. WhatsApp is also building out a business product, which will let brands and retailers communicate with users via messages. Given Facebook’s interest in cryptocurrencies, it seems that there may be an opportunity for the company to push deeper into commerce and payments as things become more and more private and secure.

But WhatsApp and Messenger are not big businesses for Facebook despite having more than 1 billion users apiece. But they’re going to have to figure out how to make money from them.

Is this a formidable challenge?

Yes, there are definite tradeoffs. Messages that are end-to-end encrypted are not accessible by Facebook, which is great news for privacy, but also make it easier for bad actors to use Facebook products to do harm.  According to Recode, WhatsApp is already dealing with this in India, where so-called fake news has been a real problem, in some cases leading to real offline violence. In Brazil, a WhatsApp executive was arrested a few years ago because the government wanted access to some user messages, which Facebook claims it couldn’t provide. Zuckerberg said that in Facebook’s private, encrypted future, the company will not be able to catch posts on “child exploitation, terrorism, and extortion,” but that it still has “a responsibility to work with law enforcement and to help prevent these wherever we can.”

Is this why Facebook wants to merge all of its messaging apps?

If people are flocking toward private messaging, Facebook will need to integrate its services so that’s it’s easier to create one massive network. Zuckerberg said as much on Wednesday.

“Today if you want to message people on Facebook you have to use Messenger, on Instagram you have to use Direct, and on WhatsApp you have to use WhatsApp,” Zuckerberg wrote. “We want to give people a choice so they can reach their friends across these networks from whichever app they prefer.”

Eventually, Zuckerberg wants this to “extend” to text messages as well.

It’s also possible Facebook is doing this to avoid anti-trust problems. There has been a lot of talk in the past year that Facebook is too big, and may need to be broken up. That would be a lot harder to do if all its apps and services are linked.  So Zuckerberg may be thinking, “How can I avoid antitrust remedies by Congress?” 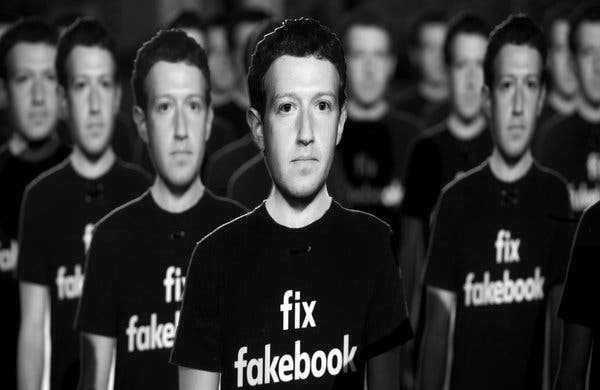 Dr. Zeynep Tufekci, a professor of information science who specializes in the social effects of technology, believes there are four questions not answered in Zuckerberg’s post.

They are: Will Facebook stop collecting data about people’s browsing behavior, which it does extensively? Will it stop purchasing information from data brokers who collect or “scrape” vast amounts of data about billions of people, often including information related to our health and finances? Will it stop creating “shadow profiles” — collections of data about people who aren’t even on Facebook? And most important: Will it change its fundamental business model, which is based on charging advertisers to take advantage of this widespread surveillance to “micro-target” consumers?

Dr. Tukekci concludes, insightfully, that until Facebook changes the invasive way it makes its money and its lack of meaningful oversight, she doesn’t expect any shift by Facebook toward privacy to matter much.