March for Our Lives! 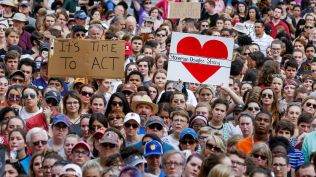 Hundreds of thousands of Americans took to the streets in cities across the U.S. on March 24, 2018, in the biggest protest for gun control in a generation.

The big question is, can this demonstration against gun violence achieve real change? The student activists are demanding that their generation be the generation to make change happen. They are vowing not to stop protesting and demonstrating until law makers enact better common sense gun policy.

These kids are creating momentum to get the vote out for the 2018 election.  David Hogg, Parkland survivor’s speech empowered his generation to get out to vote in the 2018 Congressional Primary, so real change can take place!

Other Parkland survivors made powerful and moving speeches as well. Some to lay tribute to the fallen students of gun violence and some to motivate and inspire the crowds to keep moving forward with this fight to change gun policy in the country.  Some are bravely and directly confronting the NRA and its mission to arm every man, women, and child in the U.S. These kids have placed big targets on their backs by standing up for what they believe in and speaking out about it!

Not only did the Parkland survivors speak out during the rally but the 9 year old granddaughter of Martin Luther King Jr., Yolanda Renee King, spoke out about what her dream is and it is simple, “enough is enough” and she wants a gun free world and led the crowds in a chant.

As you might already suspect, the NRA and its supporters are strongly opposed to the message these kids are sending. They believe that these kids have been manipulated by the political and media left and financed by rich celebrities to spew leftist rhetoric. NRA TV is advertising to “Stand and Fight for our Kids’ Safety by Joining NRA.”

The NRA has finally come out to speak about the Great Mills High School shooting that took place just days before the March for Our Lives. They believe because the shooter, 17 year old student, Austin Wyatt Rollins, was disarmed and was pronounced dead on Tuesday after exchanging fire with the school resource office that this should be the model for how to protect our kids in their schools.  Their argument is to bring more guns into the school setting to train teachers and school personnel to defend the students and this will lower the gun violence.

The main difference between this school shooting and Parkland’s shooting was that Rollins used a hand gun and not an AR-15 (semi-automatic rifle). The school resource officer was able to contain the gun violence before it took more than the life of 16 year old female student, Jaelynn Rose Willey and injured a second male student. Whether arming school personnel will solve the gun violence problem in our schools remains to be seen.

Regardless of which side of this issue you may fall on, one thing is certain that gun violence, especially in the school system, needs to end.  Policy and laws need to change to better protect the innocent.  I think the difference with this movement from any other gun control protest, is that since Valentine’s Day, the focus has remained on the victims and not the shooter.  These student’s found their voice in the midst of tragedy and are leading our country towards a better gun policy.

1 Response to March for Our Lives!