Full dislcosure: I am a movie fan but not an Oscars nominations groupie. I could not name all the movies or actors up for awards but I did see a trailer of “Three Billboards Outside Ebbing, Missouri” and said, “wow, that looks interesting” and went to see it with my wife on Saturday before the Oscars.

More than interesting.  Haunting and captivating withgreat performances by all the cast members in addition to Frances McDormand and Sam Rockwell and made us invested in the Oscars outcome.

The reason for the three billboards in the title is revealed early in the film by Ms. McDormand’s character (her daughter is brutally raped and burned) but the mystery of who committed the rape and burning hangs like an evil secret over the town.

After the billboards go up so do the town’s hackles.  Embarrassment spirals out of control as vindication becomes revenge as people’s lives begin to unravel. 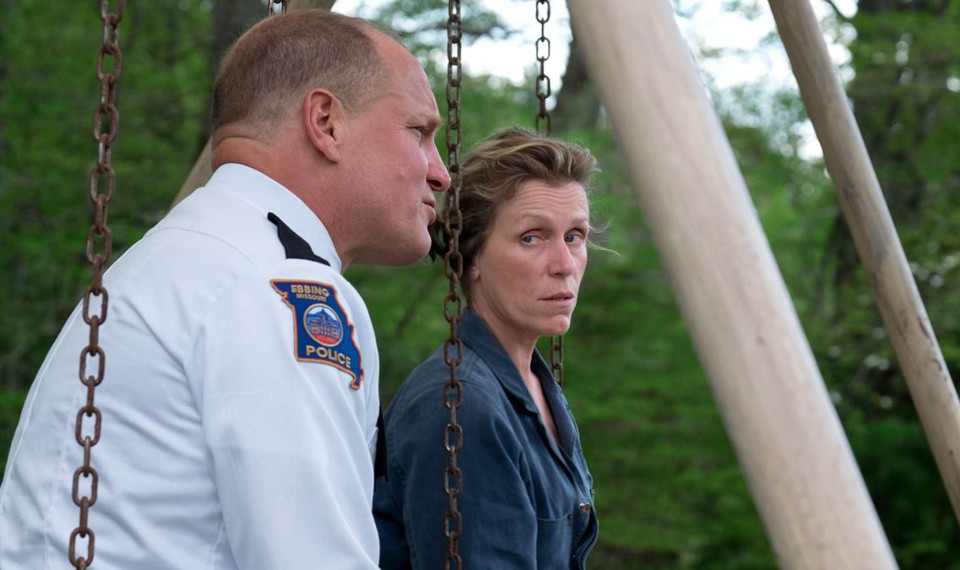 All the while Ms. McDormand’s character gets in deeper and deeper until her righteous indignation destroys what’s left of her own family–an estranged son in high school and a husband who left her for a dumb-as-a-box-of-hammers 19-year old that yields brief but much-needed comic relief by John Hawkes and Samara Weaving.  Yet her journey toward justice is interrupted by tragedy and suicide which only confounds the search and accompanying violence, scenes that are hard to watch. 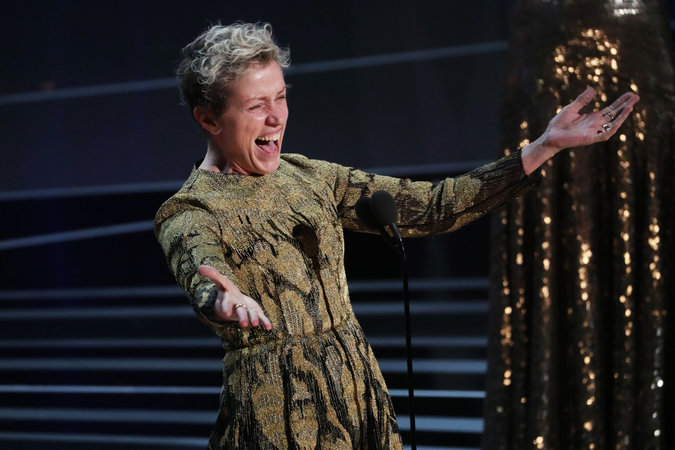 I wanted Ms. McDormand to win “best actress” and glad she did.  Her character of flawed small town mom where local prejudices and “Ebbing’s Finest” rule the roost and all who congregate there with Ms. McDormand’s character as both victim and perpetrator.  There are few good guys here and those that try are tripped up by life’s bad breaks.

It’s based on a real story, slightly changed to add cinematic gravitas but in essence tells the story of heartbreak in the heartland.

But at her Oscar awards acceptance speech, Ms. McDormand turned the billboards of fictional Ebbing, Missouri into billboards for the real Hollywood, California–a public plea also about justice–justice for women to be recognized for their talent and to be treated equally.  She asked all  women, starting with Meryl Streep, who had either won or been nominated for awards, to stand and be recognized.  They did so enthusiastically.  It was an emotional moment that put the faces of not just the #MeToo movement but for all women in Hollywood.

“I have two words to leave with you tonight: “inclusion rider,” she said. The words refer to actors putting diversity requirements into their contracts about the other crew and actors’ positions for a film they choose to act in.

An “inclusion rider” is a clause in an actor’s contract that requires the cast and crew be diverse in order to retain the actor. That’s kind of a brave thing to say on such a big stage.

“Three Billboards” is a haunting story shining a bright light on dark places in people’s lives, not unlike a documentary on the missed-out lives of coal miners and their families in Appalachia but with the thread of story that makes lives real.

And if you like that kind of gritty American reality, the kind where people who wear red hats with “Make America Great Again” or who are just trying to make ends meet with no silver spoons in sight, who drift into alcoholism, racism, tribal animosity, and the bad decisions such lives often lead, lifted only briefly by tender mercies, then “Three Billboards Outside Ebbing, Missouri” is for you.  Note that F-Bombs fall like summer sunbeams on hanging porch plants but they’re what make “Three Billboards” so riveting and achingly true.

The last scene between Ms. McDormand and Sam Rockwell, the racist cop who is caught and burned in the police station when Ms. McDormand fire bombs it, lightens the ugliness but mystifies the ending as to “who” did the rape and killing and what McDormand’s and Rockwell’s character are going to do about it.

It’s not a date movie, but neither is real life.  But it will pack a punch you won’t soon forget.