Posted on February 5, 2018 by kerryvanderslice 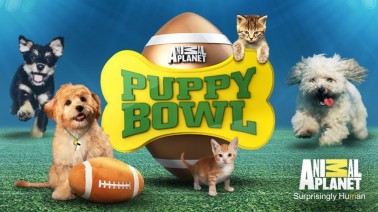 The Puppy Bowl returns this year with rescue puppies from all over the country and Mexico. Puppy players on Team Fluff and Team Ruff battled it out in the 14th edition of Animal Planet’s Puppy Bowl. Similar to the Super Bowl, the Puppy Bowl means big business for the network. Last year over 2.5 million viewers tuned in to watch adorable, adoptable pets run up and down the field. 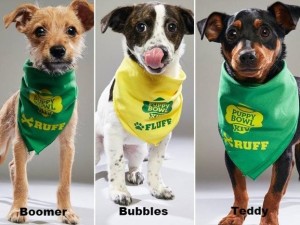 Puppy Bowl XIV has attracted top puppy players from 48 shelters across the country as well as Mexico. An organization called Compassion Without Borders discovered a talented athlete by the name of  Mango wandering the streets of Puerto Penasco and flew him in to play this year.

A chicken named Jokgu played the National Anthem and Shirley, a rescued sloth was an assistant referee. And just when you thought things could not get any cuter, baby ducklings, piglets and baby bunnies cheered the puppies on from the sidelines. As with any sports game, there are penalties which include unnecessary ruffness.

There was a heated fourth quarter with “good dogs”on both teams playing their hardest but in the end, it was Fluff’s Kaleb Junior, the rescued dog from Puerto Rico after Hurricane Maria whose touchdown stole the win against Team Ruff. For the second year in a row, Team Fluff brought home the Lombarky Trophy.

If football is not your cup of tea, the Puppy Bowl offers an adorable alternative while shining a spotlight on rescue pets. Most dogs that play get adopted even before the show airs. Animal Planet also incorporated a spin off called the The Dog Bowl which showcases older canines in need of “furever” homes. For Animal Planet, the number of Puppy Bowl points is beside the point.The main goals are to steal our hearts and bring awareness to pet adoption. Mission accomplished at least for this viewer.

This entry was posted in Puppy Bowl. Bookmark the permalink.