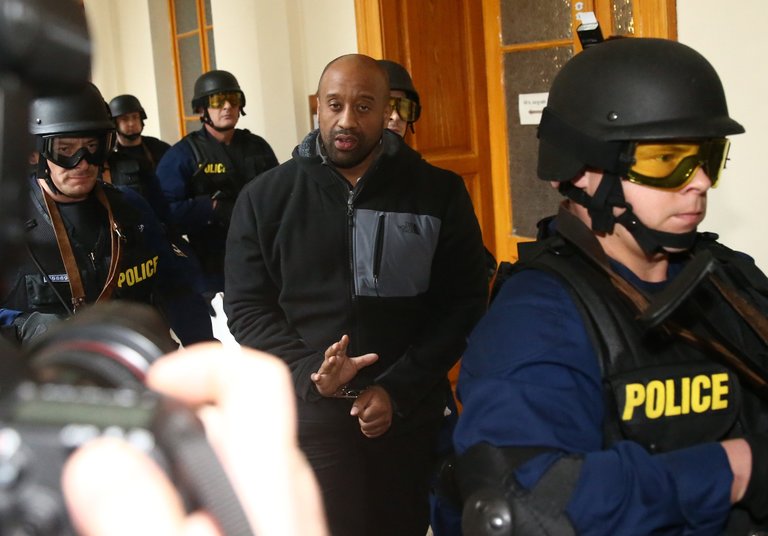 The man social media misidentified as the London terrorist who ran over pedestrians on a London bridge and then stabbed to death a Parliament guard.  This man was actually in prison at the time of the terrorist incident.

Now, for the second time, social media has misidentified a terrorist in the early stages after a terrorist attack. The first well-publicized one was in misidentifying the terrorist brother, Dzohkhar Tsarnaev, in the Boston Marathon bombings on April 15, 2013 and now, more recently, in the London terrorist attack by a man who ran over pedestrians on the Westminster Bridge, killing four, and stabbing and killing a Parliament guard wounding scores of others after running them over with his rented SUV.

According to the New York Times, in Twitter posts, Facebook messages and a live British television news program, people pointed to Abu Izzadeen, a radical British cleric who was imprisoned last year for running afoul of British terrorism rules. His photos were shared on the internet. His Wikipedia page was updated with the information.

But they were wrong.

Not only was Mr. Izzadeen not the assailant in Wednesday’s attack, but he was also in a British prison, according to his lawyer, Tanveer Qureshi.

“He was not responsible for these terrible and unjustified attacks,” Mr. Qureshi said by email.

The real assailant was identified on Thursday as Khalid Masood, 52, a British-born man who had been previously investigated for potential ties to violent extremism and had a lengthy criminal record.

When 22-year-old Brown University student Sunil Tripathi disappeared in March 2013, his family turned to social media to help locate him, little did they realize the effort would result in widespread accusations that he was the second Boston Marathon bomber.

In one of the more major media failings in a long line of media failings shortly after the remaining brother was captured hiding in a boat in the backyard of a resident of Watertown, MA, Brown University student Sunil Tripathi was found dead in the Providence River less than a week after the Boston Marathon bombings.  It appeared he had been missing in the weeks prior but was widely identified as a suspect in the bombings when in fact the real bombers were identified as the Chechen-American brothers Dzhokhar Tsarnaev and Tamerlan Tsarnaev. Though the origins of the rumor are difficult to pin down, it appears as if the speculation about Tripathi’s involvement in the attack began on Reddit before making the leap to Twitter, various news outlets (including this one), and even, reportedly, police scanners.

In the chaos that ensued, Tripathi’s family members were inundated with dozens of phone calls from reporters—his sister got nearly 60—and were forced to take down a Facebook page dedicated to finding Tripathi after it became littered with “hateful, angry posts.” When Tripathi’s body was pulled from the Providence River and officially identified as Sunil Tripathi, it finally putting to rest the rumor mill that had made his family’s life hell.  No foul play was suspected in the drowning or official cause released.

In the era of 24/7 never-ending news cycles, the problem seems both acute and chronic.

In the case of the London terrorist, before British officials identified Mr. Masood on Thursday, they urged media outlets to avoid publishing the names of any suspects in the attack. But the pleas did little to stop the misinformation online, particularly in the hours immediately after the event.

A Russian news site published a fake photo of the suspect. Twitter posted false reports of potential victims. And Donald J. Trump Jr. reposted a news report that had incorrectly named Mr. Izzadeen as the attacker.

In the digital era, people increasingly seek real-time coverage, readily supplied by all manner of sources, credible and otherwise. This frenetic online environment has fostered the perfect space for rumor mongering, creating a need for fast and accurate ways to counter false narratives.

The warning and pleas of British officials make sense.  Words warn, inform, as well as hurt. As the old adage attributed to the poet Carl Sandburg says, “be careful with your words.  Once they are said, they can only be forgiven, not forgotten.”  For a journalist or a news platform, that can make or break a reputation.  For someone falsely accused, it can be ruinous for their family’s privacy and perhaps deadly for them.