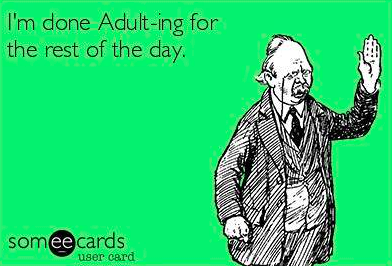 Adulting is a thing now.  You know, because where else would parents turn if a slang term hadn’t been created to turn into a meme or use in a post while bitching about your decision to create and raise a child in this world for others to feel sorry for them?  At first it was cute, seeing your friends kid pop up on your Facebook feed or while scrolling through Instagram but then it got old.  I don’t need to see your kid sitting next to a big block with ‘7 months’ scribbled on it to remind me how old they are, what happened to celebrating birthdays once a year?  Maybe they just wanted to remind themselves of how simple life used to be?  You wake up, cry until you’re fed and then let your parents dress you up to take pictures to show to their friends.  Now companies are capitalizing on this notion that millennial parents are yearning for their own childhood day.  Brands have started to cater towards these millennials who have children but aren’t above admitting  they could use a break every now and again.

It has become apparent that at least in my group of friends, parents have taken to social media to discuss the joys and disappointments of parenthood.  Whether it be advice on how to deal with teething problems, posting about your son’s big doo-doo (seriously?) or flat out complaining about how hard it is to be a parent, millennials use the internet and social media as a coping mechanism.  As if there aren’t millions of parents before them who had to go through the exact same things you’re experiencing, albeit with far less resources and not having virtually everything at your fingertips with a smartphone.  But that makes it even easier to post a cute picture of your daughter’s outfit for the 100th time or putting your son in his first Eagles jersey.  Yes it is cute, but it used to be a lot better only seeing those pictures in a baby album or photo book every couple of years, if at all.  Now, brands are capitalizing on these millennials who want to turn back time to a place where everything was carefree and simple – as a kid!  The irony of it all!

I believe it all stems from our access to the internet at such an early age where you could virtually search for any information you wanted and it only got better as we matured.  Coupled with social media where you can share your opinion and pictures even when people could care less and people will started to realize an overwhelming less serious approach to parenthood.  Or at least being able to poke fun of yourself after a long day and realizing you’ve got to repeat that for many years to come.  Generations before us didn’t have an outlet where they could voice their true feelings on parenthood and I guess they used to talk about it over the phone or a a party with other parents.  So where does this leave us and what to make of it?

I’m not saying every parent is as intolerable as the ones I’ve mentioned, but we all know someone who posts way too much about their children and/or parenting problems.  There is a time and place, but when is it enough?  It’s a sensitive subject and not one that’s easily approachable because if you do bring it up the parent tends to get defensive and think you are insinuating their child isn’t important or cute.  Not a good situation to put yourself in and I was confronted with that last week.  My cousin who I’m not very close with but has a 2 year old was at a family outing last week in Philadelphia.  Her kid was in the middle of a tantrum and after finally calming him down, she looked at her husband and asked if she could get drunk and pass out in the back of the van on their drive back to Baltimore.  Apparently she had enough of ‘Adulting’ for the day and I realized I was due for a second plate of food and excused myself of the awkward situation.  I’m sure when I have kids I will feel her pain one day, but in the meantime I’ll continue to like pictures of yours to avoid any problems for not liking your picture.