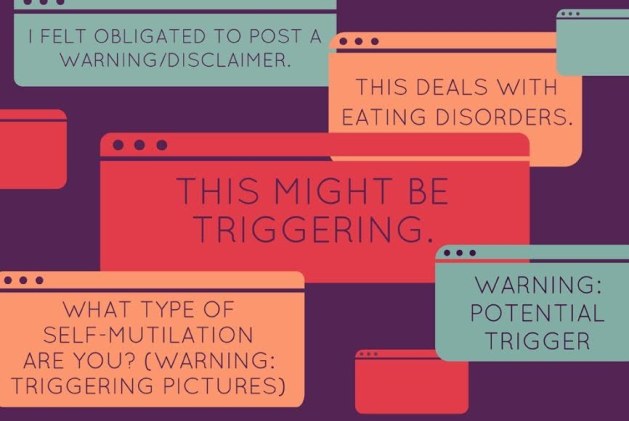 Trigger warnings (also known as content warnings) have become increasingly popular as a topic of debate, although they are not a new concept. The point of using trigger warnings online began as a way to alert people with post-traumatic stress disorder to particularly traumatic content, thereby giving them a choice in how they engage (or don’t) with that content. As I scrolled through my Facebook News Feed today, I saw warnings as simple as “CW: abuse” as well as more lengthy posts that started with “I feel obligated to offer a trigger warning for the following content…” At some point over the last few years, I’ve also noticed the use of trigger warnings expand far beyond the blog and social media spheres.

@shondarhimes I just wish there'd been a trigger warning at the end of the commercial break. That's my major complaint.

Colleges and universities across the country are being told by their students that trigger warnings should be included in course syllabi, and discussed at the beginning of the semester out of respect for those who might be struggling with mental health issues. Critics of the trigger warning argue that this is merely a new form of political correctness, and that by indulging young adults in this effort we are simply “coddling millennials.”

Kate Manne, Assistant Professor of Philosophy at Cornell, says that she doesn’t see a reason not to provide trigger warnings.

“As a professor, it merely requires my including one extra line in a routine email to the class… The cost to students who don’t need trigger warnings is, I think, equally minimal. It may even help sensitize them to the fact that some of their classmates will find the material hard going.”

I personally think that if we are utilizing trigger warnings with purpose and being supportive of those who struggle with mental health issues, there really is no downside. This conversation does make me wonder where the future of “triggering” content is headed on social media, and how the use of the trigger warning will impact our daily rhetoric.

Click here to learn more about “how the trigger warning took over the internet.”