I love March Madness for several reasons — it unifies the national conversation around something positive namely college basketball, it celebrates the committment and talent of great college athletes and it means spring is almost here.  But, I was intrigued when doing some research about March Madness and social media to see that the Twitterverse and Facebook might be the best places to go to predict which teams will succeed in the tournament.

A data analytics company called Prime Visibility has had a 74% success rate in predicting NCAA success over the last two years.  And, even after last Thursday night when most brackets were already busted, Prime Visibility did 98.7 percent better than all other ESPN registered brackets using its social media mention methodology.  They got 13 out of the 16 games correct.

Our #SocialMedia bracket is still going strong! 18 out of 21 correct picks & in the top 99.6% on ESPN #MarchMadness https://t.co/9LUZQ1LIJf

Here’s what its bracket looked like as of this weekend. 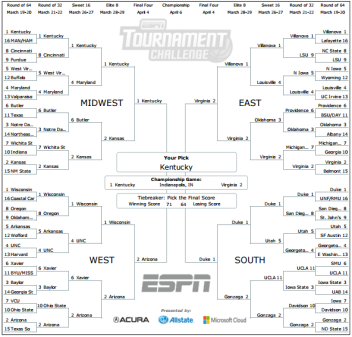 “If you look at what generates the most positive mentions about a team, it’s things like a great win, a great play, or a player haveing a great game.”

So, while this appear to work for NCAA basketball, what is its significance for us.  For me, I believe that it bodes well for brands who often worry disproportionately about negative over positive mentions.  This research suggests that done correctly positive mentions can easily overwhelm and drive great brand awareness and loyalty despite negative or neutral posts.  In a world where we too often celebrate the negative, this research suggests a whole new approach to social media management.

1 Response to Accentuate the Positive — Mentionology